Your house was foreclosed on. Your fiance left you. You lost your job at the dealership. Now you’re on the streets…and you’re pissed.

Earn rep through sammich-fights, can collecting, and windshield-cleaning. Use your rep to stake out a pad, from the humble park bench to the coveted abandoned minibus.

Face increasingly difficult enemies! Mumbly vets are harmless alone, but watch out when they swarm. You’ll have to be lightning quick to dodge the crack-fueled attacks of the addict!

Fear the police. Once you’ve gotten more than three move-alongs, they’ll bring in the K-9 units.

Beat out your fellow hobos to become king of the streets and score that sweet posh job at the Y, scrubbing floors.

I have just forumlated a new hypothesis. Why do companies insist on shipping unfinished, buggy products? Because as we all know, things which are not yet fully developed are cute. Case in point,

Isn’t that cute? You can tell it hasn’t finished growing. It has a long ways to go before anyone would consider it mature. It’s clumsy, mostly helpless, and weak. All of that just screams *CUTE* to us.

Sadly, because most manufactured products have neither face nor voice, the cuteness of its unfinished nature eludes us completely.

Hey, commercial sector? GET A CLUE!

Though she probably won’t see this.
Sue writes a webcomic I’ve really enjoyed over the years, called a Doemain of Our own, http://www.doemain.com loosely based on her own life. She has the wit and drawing skill to deserve publication in newspapers, but like many who deserve a spot in those papers, 80-year-old letter writers will continue to make it impossible to bump out dead wood like Garfield and Ziggy. From what I’ve seen directly and heard from friends who know her, she’s a fun lady to know and be around, and I hope life is good to her from here on out.
:K)

As far as humanity, I realized that internet forums are a representative microcosm of the human race and its behavior.

END_OF_DOCUMENT_TOKEN_TO_BE_REPLACED

In honor of Friday, I started a Nerf LJ community. Why? Because the ones that exist are defunct. http://community.livejournal.com/nerfnauts/

Anyone who’s actually interested in the Nerf posts I make should probably watch the community at least. You might see some truly cool schtuff from other folks than me.

Looks like homework is the magic word for this weekend. Le sigh. I’m also going to try and Plastidip the grips of a Nerf gun to see what happens. :KD

*slurps the otter up, down, and side to side* Have an awesome day, ottery.

Also, I wanted to share a rather obvious revelation I had last night.

Nobody is inherently interesting. You must make yourself interesting. How? Through experience, action, and knowledge.

END_OF_DOCUMENT_TOKEN_TO_BE_REPLACED

Some of you know I’ve been working on a research paper for weeks now. I’ve procrastinated an awful lot too. Here’s the paper as it stands at 8:40 a.m. I have until 4:30 p.m. to get it to my professor’s office. Those of you who feel like wading through about eight pages of my paper about the democratization of journalism through blogging should peek at this and give me a brief but honest opinion of the piece as it is.
END_OF_DOCUMENT_TOKEN_TO_BE_REPLACED

I just got through watching Fightclub again, and thought I’d ruminate about violence for a moment. 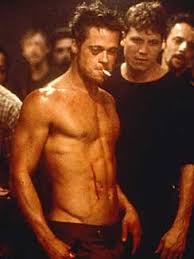 But to hurt *them*, myself? To smash my car into theirs, get out of my car, pull them out of theirs, and beat the living tar out of them? I think it’s beyond me.

That doesn’t prevent me from enjoying violence-fantasies. Practically every geek on the planet has wanted to be Neo at some point, shooting lots of guns and throwing punches that shatter concrete. Many of us collect weapons, from our era and times past, as if by possessing them we might gain back a flicker of the warrior spirit that used to dwell in so many of us.

Nowadays if someone periodically hurts or kills others, they’re fed into a system aimed towards driving the rage and violence out of them, to make them another quiet little cog in society. The violent people in our prison systems today are the soldiers who fought our wars centuries ago. Today they’re not needed. We turn from that ‘ugly’ side of our nature…deny it, shun it, lock it away. But you know that spirit dwells in us.

Why else would we watch what we do on television and in movie theaters? Why would we play the games we do, and shoot each other with infared beams or paintballs? We are creatures of violence. Even if we are pasty and fat, the flicker’s still there.

Will we evolve out of this fascination for carnage? Will we stop enjoying holding tools of murder in our hands? (Why *is* a gun so comfortable to hold? Why do we enjoy swinging a sword more than a baseball bat?) Or will it always be with us, and we’ll just keep finding more realistic ways to simulate the killing and destruction that lives in the reptile parts of our brains?

Our laws keep the strong from dominating the weak. The weak survive to reproduce, when nature would have it another way. I don’t believe nature should have its way, (I’d soooo be naturally selected!) but it’s undeniable that it has caused problems. Disease. Old people hooked up to machines to survive for another day of…sitting there hooked up to machines. Couples that couldn’t be bothered to use protection living off government money to support their six kids. (Not a racist statement. I don’t care if you’re a redneck honky or an African American, or whatever. If you can’t support a kid on your income, much less FOUR, learn how to use a condom or start trying anal sex!) I’ve met a man who tried to kill his baby daughter in the hospital, just a few days after she was born. The mother is a beaten, submissive wreck with missing teeth and a marginal IQ. Guess what? That couple had their children returned to them by the government, after a foster family (mine) raised them for two years. (During that time, the mother got pregnant yet again.)

I do believe every life is unique and ought to be preserved… But there are a *lot* of assholes out there who ought to be beaten within an inch of their lives, if that’s what it takes to drive the assholeishness out. Some days, I meet or see someone who by my standards (and I’m a fairly tolerant guy with no particular enmity towards any specific people group, religion, etc.) should die, and I just want to go ahead and do it. Sure I’ll go to jail. But at least I’ve removed that person from the world, and saved people a lot of potential suffering.

Ionotter showed me one of those people when he pointed out a videoclip of a large man beating a much, much smaller man in a pizza parlor…while no one lifted a finger to intervene. He was a grown version of a schoolyard bully who had never been taken to task properly for exceeding accepted societal tolerances. Such disregard for other people…such lack of empathy… There’s a human whom the village should stone to death.

This has kind of wandered all over… I’m just struck by the duality of myself when it comes to violence, and the larger reflected duality of us all over the same thing. We are so immature. We don’t know ourselves, we can’t deal with our children, and the few voices of sanity and maturity we have are drowned out by football games, bloodthirsty news anchors, and commercials for luxury automobiles.

with you all, on the slim chance it will make you laugh out loud.

I’ve had another story idea. I need to know though if any of you have heard/read of anything like this before.

We all would like to know where we go when we die right? What if science discovered a way for a soul to transmit their experience back to the physical plane somehow? But the treatment/method to let the souls do so requires the subject be specially bred/genegineered? And of course you’d want to know if ‘good’ people go somewhere different than the ‘bad’ people. And to make sure your subjects went down one road or another…you raise them in a sham of a life meant to make certain one goes up…and another goes down.

Does this sound familiar at all? Or is this a new spin on the whole afterlife question? If it’s mostly new I’ll go ahead and try to build this into my first novel.

Okay, we’ll see if this appeals to anyone. Some of us use LJ to share word about neat stuff with each other, right? Furry_Aww_Yeah (or FAY if you want to be silly) is open for the sharing of anything you’ve come across that you’d like to let others know about. Whether it’s a product, a work of your own, a story, a joke, a website…whatever, just tell us about it and help us appreciate it as you do. The community was created for furries, but you can share whatever you like, furry or not.

If you’re not a fur and you’d still like to join up, go ahead. Just be aware who I’m aiming the community at. :K)

A portfolio of vore-centric fiction, art, and other content.